Why do PCB circuit boards need to be tested

Basically, the purpose of setting test points is to test whether the components on the circuit board meet the specifications and solderability. For example, if you want to check whether there is any problem with the resistance on a circuit board, the easiest way is to measure with a multimeter. You can know it by measuring both ends.

However, in a mass production factory, there is no way for you to use an electric meter to slowly measure whether each resistance, capacitance, inductance, and even the circuit of each IC on each board is correct, so there is the so-called ICT ( The emergence of In-Circuit-Test) automated testing machines, which use multiple probes (generally called "Bed-Of-Nails" fixtures) to simultaneously contact all the parts on the board that need to be measured. , And then measure the characteristics of these electronic parts in a sequence-based, parallel-based way through program control. Usually, it only takes about 1 to 2 minutes to test all the parts of the general board, depending on the number of parts on the circuit board. It depends, the more parts the longer the time.

But if these probes directly touch the electronic parts on the board or its solder feet, it is likely to crush some electronic parts, which will be counterproductive. So smart engineers invented "test points", which are located at both ends of the parts. A pair of small circular dots are additionally led out, and there is no solder mask on them, so that the test probe can touch these small dots instead of directly contacting the electronic parts to be measured. 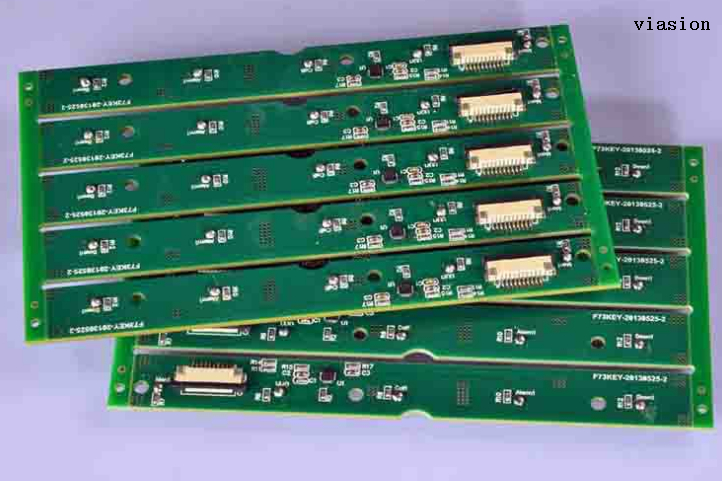 In the early days of the traditional DIP on the circuit board, the solder feet of the parts were indeed used as test points, because the solder feet of the traditional parts were strong enough to not be afraid of needle sticks, but there were often poor probe contacts. Misjudgment occurs, because after general electronic parts undergo wave soldering or SMT tin, a residual film of solder paste flux is usually formed on the surface of the solder. The impedance of this film is very high, which often causes detection. The contact of the needle was poor, so test operators on the production line were often seen at that time, often holding the air spray gun to blow desperately, or rubbing the places that needed to be tested with alcohol.

In fact, the test points after wave soldering will also have the problem of poor probe contact. Later, after the popularity of SMT, the misjudgment of the test was greatly improved, and the application of test points was also given a great deal of responsibility, because the parts of SMT are usually very fragile and cannot withstand the direct contact pressure of the test probe. Use test points. This eliminates the need for the probe to directly contact the parts and their solder feet, which not only protects the parts from damage, but also indirectly greatly improves the reliability of the test, because there are fewer misjudgments.

However, with the evolution of technology, the size of the circuit board has become smaller and smaller. It is already a bit difficult to squeeze so many electronic parts on the small circuit board. Therefore, the problem of the test point occupying the circuit board space is often There is a tug-of-war between the design side and the manufacturing side, but this topic will be discussed later when there is a chance. The appearance of the test point is usually round, because the probe is also round, which is easier to produce, and it is easier to bring the adjacent probes closer, so that the needle density of the needle bed can be increased.

1. The use of a needle bed for circuit testing has some inherent limitations on the mechanism, for example: the minimum diameter of the probe has a certain limit, and the needle with too small diameter is easy to break and damage.

2. The distance between the needles is also limited, because each needle must come out of a hole, and the back end of each needle must be welded with a flat cable. If the adjacent holes are too small, except for the needle and the needle. There will be a contact short-circuit problem, and the interference of the flat cable is also a big problem.

3. Needles cannot be planted beside some high parts. If the probe is too close to the high part, there is a risk of collision with the high part and cause damage. In addition, because of the high part, it is usually necessary to make holes in the needle bed of the test fixture to avoid it, which indirectly makes it impossible to implant the needle. Test points for all parts that are increasingly difficult to accommodate on the circuit board.

4. As the boards are getting smaller and smaller, the number of test points has been repeatedly discussed. Now there are some methods to reduce test points, such as Nettest, TestJet, BoundaryScan, JTAG. . Etc.; there are other test methods that want to replace the original needle bed test, such as AOI, X-Ray, but it seems that each test cannot replace ICT 100%.