What issues should be paid attention to in high-speed PCB design?

1. The influence of wiring topology on signal integrity Signal integrity problems may arise when signals are transmitted along transmission lines on high-speed PCB boards. For a set of buses (address, data, commands) driving up to 4 or 5 devices (FLASH, SDRAM, etc.), when PCB wiring, the bus arrives at each device in turn, such as connecting to SDRAM first, then to FLASH... …The bus is still distributed in a star shape, that is, separated from a certain place and connected to each device separately.

The influence of the wiring topology on signal integrity is mainly reflected in the inconsistent signal arrival time on each node, and the reflected signal also does not arrive at a certain node in the same time, which causes the signal quality to deteriorate. Generally speaking, the star topology structure can achieve better signal quality by controlling several branches of the same length to make the signal transmission and reflection delay consistent. Before using the topology, the situation of the signal topology node, the actual working principle and the wiring difficulty should be considered.

Different buffers have different effects on signal reflection, so the star topology cannot solve the delay of the data address bus connected to FLASH and SDRAM, and thus cannot ensure the signal quality; on the other hand, high-speed signals generally For communication between DSP and SDRAM, the rate of FLASH loading is not high, so in high-speed simulation, you only need to ensure the waveform at the node where the actual high-speed signal works effectively, without paying attention to the waveform at FLASH; star topology compares daisy chain and other topologies. In other words, wiring is more difficult, especially when a large number of data address signals use star topology. 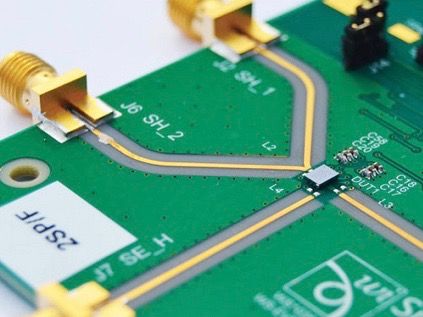 2. The impact of pads on high-speed signals In PCB, from a design point of view, a via is mainly composed of two parts: the middle hole and the pad around the hole. The pad has an impact on high-speed signals, and it affects the impact of similar device packaging on the device. In a detailed analysis, after the signal comes out of the IC, it passes through the bonding wire, pins, package shell, pad, and solder to the transmission line. All joints in this process will affect the signal quality. But in actual analysis, it is difficult to give the specific parameters of the pad, solder and pin. Therefore, the package parameters in the IBIS model are generally used to summarize them. Of course, such analysis can be received at lower frequencies, but for higher frequency signals, higher-precision simulations are not accurate enough. A current trend is to use IBIS's V-I and V-T curves to describe buffer characteristics, and to use SPICE models to describe packaging parameters.

Filtering is a good way to solve EMC radiation through the conduction path. In addition, you can also consider the interference source and the victim. In terms of interference sources, try to use an oscilloscope to check whether the signal rising edge is too fast, there are reflections or overshoot, undershoot or ringing. If so, you can consider matching; in addition, try to avoid making 50% duty .

4. RF wiring is to choose via or bend wiring Analyzing the return path of the RF circuit is not the same as the signal return in the high-speed digital circuit. The two have in common, both are distributed parameter circuits, and both use Maxwell's equation to calculate the characteristics of the circuit. However, the radio frequency circuit is an analog circuit, in which the voltage V=V(t) and current I=I(t) both need to be controlled, while the digital circuit only pays attention to the change of signal voltage V=V(t).

Therefore, in RF wiring, in addition to considering signal return, it is also necessary to consider the influence of wiring on current. That is, whether bending wiring and vias have any effect on the signal current. In addition, most RF boards are single-sided or double-sided PCBs, and there is no complete plane layer. The return paths are distributed on various grounds and power supplies around the signal. 3D field extraction tools are required for analysis during simulation. The reflow of vias requires specific analysis; high-speed digital circuit analysis generally only deals with multi-layer PCBs with complete plane layers, using 2D field extraction analysis, only considering signal reflow in adjacent planes, vias are only used as a lumped parameter RLC deal with.