Precautions for circuit board soldering 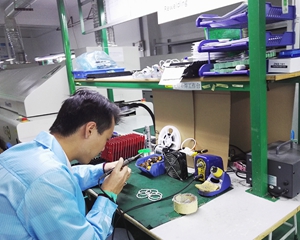 1. After getting the bare PCB board, you should first perform an appearance inspection to see if there are short-circuit, open circuit, etc., and then familiarize yourself with the schematic diagram of the development board, and compare the schematic with the PCB silk screen layer to avoid discrepancies between the schematic and the PCB.

2. After the materials required for circuit board welding are ready, the components should be classified. All components can be divided into several categories according to their size to facilitate subsequent welding. Need to print a complete list of materials. In the welding process, if one item is not completed, use a pen to cross out the corresponding option, which is convenient for subsequent welding operations.

Before welding, take anti-static measures such as wearing a static ring to avoid damage to the components caused by static electricity. After the equipment required for welding is ready, the tip of the soldering iron should be kept clean and tidy. It is recommended to use a flat-angle soldering iron for the first soldering. When soldering components such as 0603 packaged components, the soldering iron can better contact the pads and facilitate soldering. Of course, for masters, this is not a problem.

3. When selecting components for soldering, the components should be soldered in the order from low to high and from small to large. In order to avoid the welding of smaller components, the larger components that are well welded will cause inconvenience. Priority is given to welding IC chips.

4. Before welding the integrated circuit chip, make sure that the chip placement direction is correct. For the chip silk screen layer, generally rectangular pads indicate the starting pins. When soldering, fix one pin of the chip first, fine-tune the position of the component, and fix the diagonal pin of the chip, so that the component is accurately connected and then soldered.

5. SMD ceramic capacitors and Zener diodes in voltage regulator circuits have no positive and negative poles. Light-emitting diodes, tantalum capacitors and electrolytic capacitors need to be distinguished between positive and negative poles. For capacitors and diode components, generally the marked end should be negative. In the package of SMD LED, the direction along the lamp is the positive-negative direction. For packaged components marked as diode circuit diagram by silk screen, the negative end of the diode should be placed at the end with a vertical line.

7. For the welding of plug-in components, such as power module related components, the pins of the device can be modified before welding. After the components are placed and fixed, the solder is generally melted by a soldering iron on the back and then merged into the front by the pad. There is no need to put too much solder, but the components should be stable first.

8. The PCB design problems found during the soldering process should be recorded in time, such as installation interference, incorrect pad size design, component packaging errors, etc., for subsequent improvements.

9. After soldering, use a magnifying glass to check the solder joints to check whether there are false soldering and short-circuit conditions.